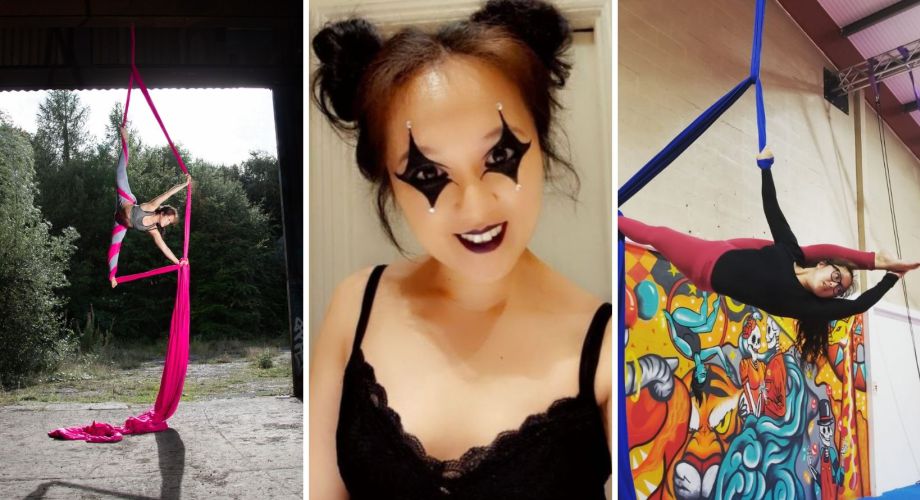 Acrobats, contortionists, tumblers – Jessica Li remembers her first trip to the circus with her family when she was a child.

She loved the performance, but it wasn’t until she stumbled across a set of silks in her gymnastics training space years later that she decided to give aerial a go.

“​I love how silks make strength look so graceful and elegant,” she said.

Jess, who grew up in Caerphilly, started learning gymnastics while she was at school. She first encountered circus when her parents took her to a show in Cardiff.

She went on to study civil engineering at Swansea University and carried on learning gymnastics in her spare time. It was in 2014 that Jess spotted some silks while she was at gymnastics practice. 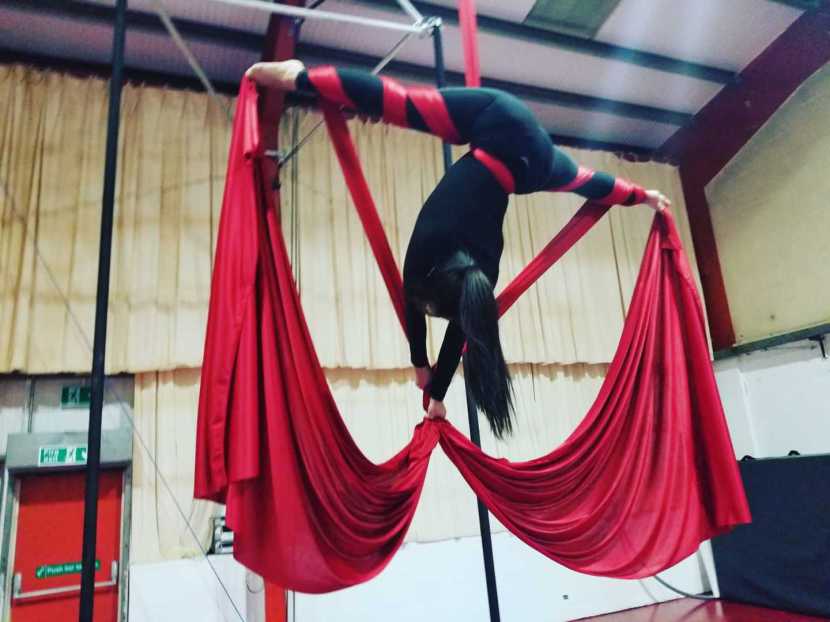 “There was a set of pink silks hanging there,” she recalled. “I’d never noticed them until I saw someone playing on them. Then I was curious.”

Fast-forward seven years and Jess now describes silks as “one of the best ongoing adventures I've embarked on”.

Jess struggled with the splits when she first started, but now her favourite move is standing splits because she worked so hard on her flexibility to get the trick looking exactly as she wanted.

Jess initially struggled with the splits

In that time, she has rigged her silks in some unusual places, including a bridge in the woods, a derelict building and an underpass.

She has taken part in photoshoots with Broken Doll Images and performed at Up Side Down Circus’ birthday show in 2018 and Halloween show in 2019.

Jess loves being on silks outside (Credit: Broken Doll Images)

“I couldn’t see anything from halfway through the performance because my glasses flew off my face,” she laughed. “I think the crowd was more impressed with that than anything else!”

Her proudest moment was perfecting a trick which involved hanging from her right arm in a “belay” loop, with her left foot locked in the silks and her right foot held behind her head in a split. She managed to hold the move, despite getting cramp in her calf.

Jess finds dynamic moves the most challenging. She was determined to improve her flexibility during lockdown, focusing on over splits. 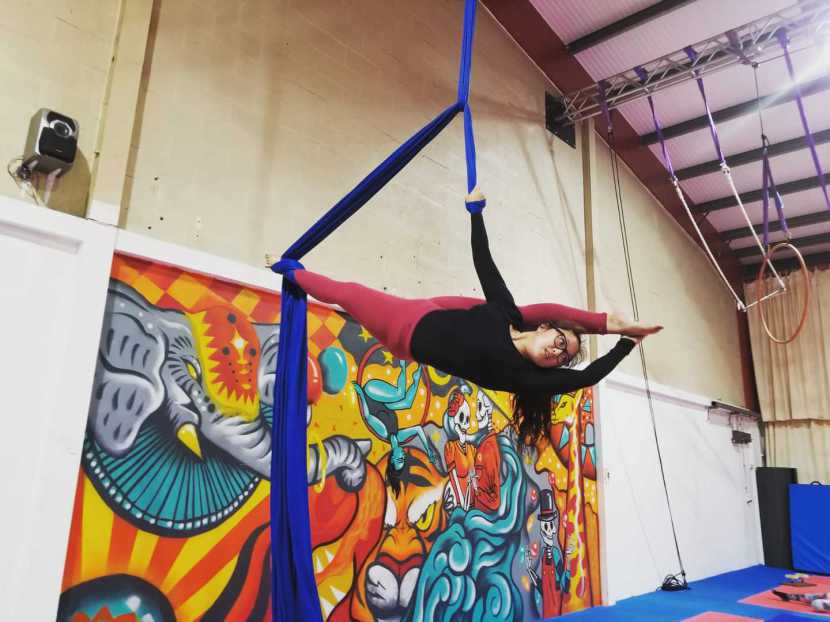 She's especially proud of this move

The 31-year-old has many talents, including learning Welsh and crochet - she crocheted the Marvel characters for her nephews last Christmas. She also enjoys origami and reading.

“I just love learning,” said Jess, who became a trainer for Up Side Down Circus in 2019.

“It had never occurred to me that I could become a trainer, but I was lucky in being given the opportunity to share something I'm passionate about.” 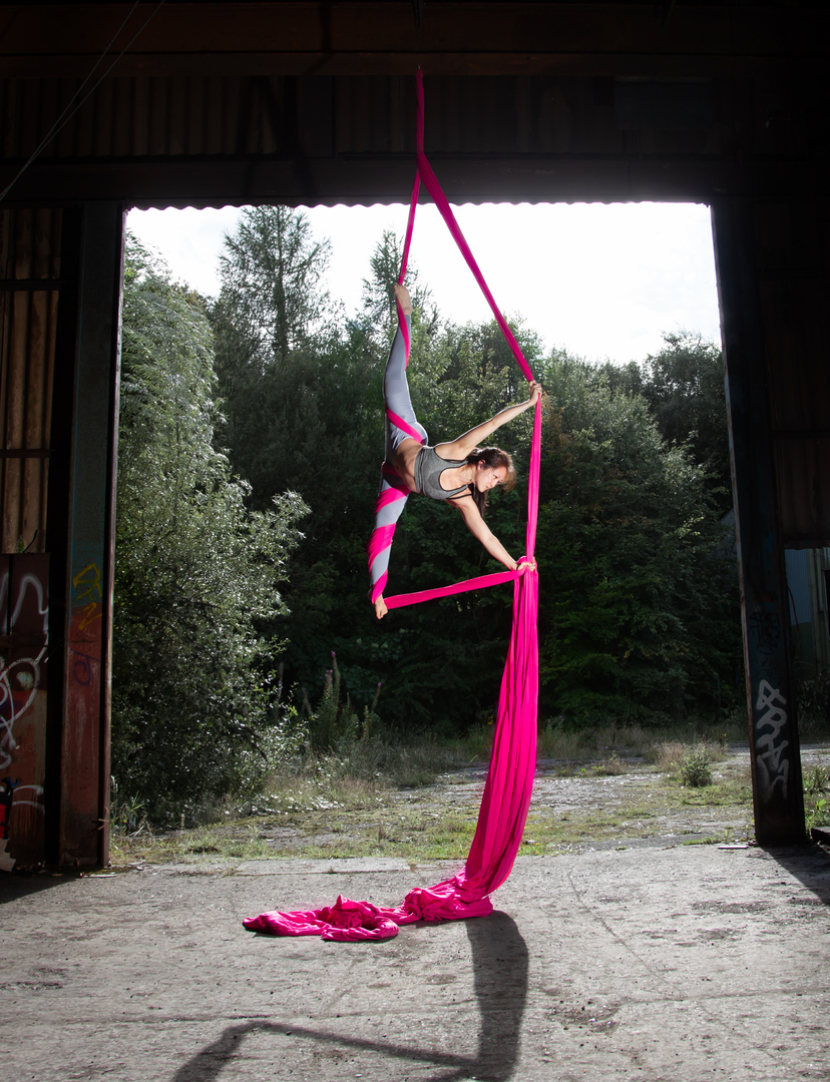 Jess became a trainer for Up Side Down Circus in 2019 (Credit: Broken Doll Images)

Jess works as a civil engineer during the day, then teaches and trains circus in the evenings. She added: “I find the contrast balances me out mentally and physically.”

Reflecting on her biggest circus ambition, she said: “To stay passionate about circus and to keep sharing that with others.”

She said the rewards of trying aerial and sticking with it are huge. Her advice to anyone thinking about giving it a go: “​Try it! Everyone has to start somewhere.”

Jess teaches silks at Up Side Down Circus on Tuesdays between 6pm and 7.30pm. For more information, visit our classes page and keep an eye on our Facebook, Instagram and Twitter pages.